The Choy Lee Fut system is built with the combination of single person, multiple person, weapon, and training apparatus sets/forms. Each of his teachers have many traditional sets/forms that were passed onto him and from his experience, he also deveoped many training and fighting sets/forms. These sets/forms total 184 sets/forms, in which 48 are single-person fist forms and about 20 are wooden dummy techniques. However, Chan Heung 陳享, the founder, recorded in his discoveries and knowledge onto paper for his closed-door students to follow was over 250 sets/forms and techniques.

The initial sets/forms in training Choy Lee Fut are Ng Lun Ma 五輪馬 (Five Wheel Stance Form ) and Ng Lun Chui 五輪搥 (Five Wheel Striking Form). These two sets/forms were created for students to begin their training of their basic foundation of stances, movement, and hand techniques. These two sets/forms must be mastered before moving on to the next level of training. Refer to this site for a list of Choy Lee Fut sets/forms http://plumblossom.net/ChoyLiFut/formslist.html.

Since Choy Lee Fut is built with the combination of Northern and Southern Martial arts, it carries a wide variety of weapons in its arsenal. Orginally, there are 40 weapons in the Choy Lee Fut system, however, over time, schools started adding different weapons into the system. Refer to this site for a list of Choy Lee Fut weapon sets/forms http://www.plumblossom.net/ChoyLiFut/CLFweapons.html. 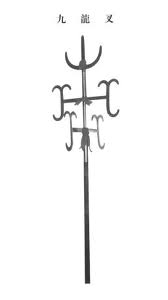 In Chan Heung's 陳享 generation, he created a weapon exclusive to Choy Lee Fut called the Nine-Dragon Trident 九龍大叉. This weapon was designed to shred any part of the opponent with which it might come into contact. With the many hooks and blades it has, the trident can also be used to seize an opponent's weapon by hooking and then twisting it.